Are you serious about seeing insane gains? Are you ready to step up your physique? Do you want to change how you feel about yourself?

Well then you have absolutely no choice but to give up booze — for a bit!

The challenge for a month here is NO ALCOHOL! ZERO. NONE. NO BOOZE. NOT A SIP.

[Note: The post is updated at the bottom after every single new no-booze challenge. Join us for one!]

Full disclosure: I love to get wasted. I love to be the centre of attention. I love to laugh. I enjoy drinking with friends.

That’s me with a flag and pink shirt. Yup, I can be “that guy.” Oh, and naturally I’m making the douche face. Nice. You see, that’s just one of hundreds of drunk pictures that I have on my laptop. I tried to pick one of the more obnoxious one to prove a point.

[Must read: How to add play to your life.]

Why give up booze for a month?

Kettlebell Rebels is all about pushing your limits. Boring ideas come here to die. It’s also about stepping outside of your comfort zone. It’s about unconventional training and saying yes to adventure.

I love to lift, blog, hang out with friends/family, and produce awesome content. I also love to laugh.

Drinking is the best thing and the worst thing for you.

Drinking gets in the way. It’s hard to train or blog when you have a massive hangover. It’s impossible to do much when you’re hungover. There are no benefits to being hungover. You waste a whole day. You might even waste two days because you feel like crap and your body needs to recover.

I also don’t want to be one of those people that need to drink to have fun.

I want to see what I’m made of! I want to go out sober. Meet strangers sober. Go into tense situations without any help. Survive social functions without relying on alcohol. Meet girls and get laid without being sloppy drunk.

[Martin’s helpful hint: You’re not charming at all when you’re over the edge. You look like a jackass!]

The goal for the 30 day no alcohol challenge is to give up alcohol without giving up on fun. Period. 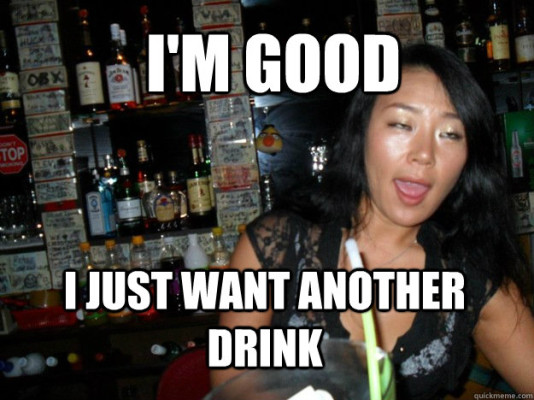 Why not drink for a whole month?

Aside from the obvious setbacks of drinking — massive hangovers and making a complete fool of yourself (OHH YEAHH), there are other issues.

I decided to check out the always handy Wikipedia for more feedback on getting hammered:

Drinking copious amounts of booze also leads to pigging out on Burger King, poutine, and all sorts of junk.

When I drink I’ll end up touching food that I wouldn’t even look at sober. Suddenly, that large poutine looks delicious.

There goes yesterday’s workout. You feel fat and lazy the next day instead of being on top of the world.

And once again, you make a jackass out of yourself. There are a few stories of myself that still give me the shivers. Did I really do that? Yup. Blame it on the alcohol. I’m sure if you’re reading this you already know the cons of drinking too much booze. You already know how you feel when you overindulge.

What are the benefits of drinking?

Alcohol can be a man’s best friend. It can help you overcome social anxiety and turn you into a different human being. I have friends that are literally a different person when they drink. They go from silent to social butterfly within two shots. Then there are those friends that go from nice guy to tough guy after a tequila.

Long story short: drinking with friends is fun and very common. That’s why this challenge may seem difficult at first.

Is it possible to go a month without drinking?

If you’re not into the scene then yes. Chances are that you’re like me and pretty social in the sense that you have a solid group of friends. It’s also likely that you enjoy spending time with your friends.

If you’re often around alcohol and have friends that drink, then it’s very challenging.

If you’re in your 20s then drinking is normal.

There are many common scenarios where most of us drink:

So is it possible to not drink for a month?

Champions always find a way. You’ll find a way if you want to tap into maximum productivity.

True friends will accept you drunk or sober. And who doesn’t need a designated driver?

I want you to do this challenge right and really push yourself. Pick a difficult month. I’ve done this in months like March and June. When you’re not drinking, I want you to kill your workouts and get some rest!

Final points to go over before you put the bottle down…

Should you get wasted right before starting this challenge?

Can you have one beer?

NOPE. No drinking allowed for this month.

Should you go out still?

100% YES! This is what separates the men from the boys. A boy needs to drink to have fun and approach strangers. A man can go out sober and own the night. You’re not a little bitch.

What if there’s too many social events?

Then do the 30 day challenge in a month that works for you or step up.

You need to and will set personal records! This is your month to own the gym. You’re not going to be hungover.

With a clear mind, I totally recommend that you go out of your way to eat clean. You’ll be amazed with the results after a month. No booze and no junk food = sexy body.

What should I do?

Keep busy. Be productive. Take on a 30-day challenge.

Are you ready to join this challenge? Share your thoughts and results below…

So March 1st was a Friday. I drove to the club and had a blast. I was even accused by a female of being too drunk just because I was joking around and being my usual self. I showed her my car keys and told her I was the designated driver. Then a minute later she was dancing on the table. Turns out she was the drunk one! I knew that the challenge was going to be possible when my cousin said to me, “why do you even waste money on alcohol? You’re the same person drunk or sober.”

The rest of the week was easy. Everyone drank wine a few times while I chugged my water. Even pulled off two sober karaoke nights. You get to see who your true friends are. Anyone that comes over to hang out sober is a real friend. Someone you have to drink with to have fun is only a drinking buddy.

The negative aspect of not drinking is that you have nothing to blame for poor judgment or obnoxiousness.

At this point I stopped tracking because I just became so focused on attaining this goal.

Results from the challenge!

I decided to give this challenge a try again in September. It went so well that I didn’t have another drink until the end of November when I flew down to Buenos Aires, Argentina.

I took January off in 2014. It was easy because well January is depressing. I also took June off. This was a bit tougher since it was the summer time. However, I just went out often and drank lots of water.

I did another challenge where I took a month off from booze and all “bad” carbs.

As you can see, I’ve accomplished this challenge many times times.

Give it a try. Go a month without a drink!

[Note from Martin: when you return to drinking, check out our ultimate guide to drinking and fitness.]

Are you going to make excuses or will you give this challenge a try? Give up booze for a month to see how amazing you feel.